after more than half a year of insanely hard work behind the scenes, I'm totally thrilled to spill the beans. boingboingboing


PITCHMAP is a plug-in that allows correcting tuning issues as well as changing key, scale, chords, harmonies and melodies of a mixed/polyphonic signal in real-time. Yep, that's right, FULL real-time, including MIDI input (meaning that you can play the notes/chords that stuff gets tuned to), macro functions for near-instant changes of key/scale, snapshot automation and lots of other cool bits and pieces. And it has a very slick GUI designed by Axel Hartmann. Announcement is now, release is scheduled for the 19th of January. Drinks will be served at the Musikmesse

Zynaptiq is the company I've recently founded together with Stephan M. Bernsee, the DSP brain behind the Prosoniq products (like SonicWORX Isolate and Morph), the DIRAC time-strecthing algo and the Hartmann Neuron synth (amongst others). I still remember reading music tech magazines in high school and drooling when I read about his software (sonicWORX Artist, at the time). I'm a big fan of his work, and really very, very excited to be working with him now

And below, there's the full press-release for your reading pleasure.

Any questions --- PM me or use the contact form on our site.

Hannover, January 16th, 2012: Zynaptiq GmbH announced the imminent release of PITCHMAP, the world's first and only audio plug-in capable of polyphonic pitch-correction and pitch-mapping in real-time.

PITCHMAP allows real-time correction of pitch inaccuracies within mixed signals, as well as completely altering the tonality, chords, harmonies or melodies of a musical signal on- the-fly, a process Zynaptiq refers to as Pitch Mapping. PITCHMAP does this using Zynaptiq?s proprietary, artificial intelligence based MAP technology (Mixed-Signal Audio Processing) to de-mix an incoming signal - like, for example, a full mix - into individual elements, and then allows the user to arbitrarily or automatically correct and modify their pitches. Additionally, PITCHMAP provides means to deliberately induce processing “errors” to make results sound synthetic in a very futuristic and unique way.

“Our DSP Developer Stephan M. Bernsee has come up with what we believe to be a real game-changer.” Zynaptiq CEO Denis H. Goekdag said. “PITCHMAP lets you reach into a recording and change the pitch-related aspects of the composition on-the-fly. You can change an entire song from minor to major with just a couple of clicks, simultaneously correcting any tuning issues and changing the key. While there are other pitch processing solutions available, PITCHMAP combines polyphonic capability, a real-time workflow and an exceptional processing quality based on techniques that model the human auditory system, thus opening up a whole new level of creativity.”

Zynaptiq GmbH, based in Hannover, Germany, creates audio software based on artificial intelligence technology, and was founded in 2011 by Stephan M. Bernsee and Denis H. Goekdag, known for their involvement with Prosoniq, Hartmann Music, Surround SFX and the DSP Dimension, amongst others.


PITCHMAP provides all of the following functionality in real-time: PITCHMAP as well as a free trial will be available from the Zynaptiq website January 19th, 2012.

PITCHMAP will initially be released as Mac AU (AudioUnits) Plug-In, with VST and AAX support for both Mac and Windows platforms planned for later in 2012.

after reading carefully through all this information i am mostly interested in the drinks.
what kind of drinks exactly will you have? i might come by this year.

PITCHMAP and the free trial are OUT NOW!

Check it out, it's awesome

Updated to version 1.04, adding mono-mono support, a custom installer as opposed to the previous Apple-made one, various small fixes. And: Live users now also get the 29 included presets

And here's a little video showing PITCHMAP changing melodies and harmonies in real-time under MIDI control in Logic Pro:

After opening up Pitchmap, setting it to an audio-track via side-chain, i wanted to start playing. But the sound gets distorted and the following message comes up:

"error while synchronizing audio and midi - sample rate 32988 not recognised"

Any help would be appreciated.
Cheers,
putte
.. http://www.putte.de .. myspace
Top

That pop-up is opened when selecting sample rates above 48khz. As the AuVal validation routine checks all sample rates, that window is also opened during validation. As the plug-in is only validated upon the first launch of Logic after installation, you should not be seeing this again.

putte wrote:After opening up Pitchmap, setting it to an audio-track via side-chain, i wanted to start playing. But the sound gets distorted and the following message comes up:

"error while synchronizing audio and midi - sample rate 32988 not recognised"

This indicates a CPU overload. For some reason, Logic will sometimes NOT throw a "CPU Overload" error message and stop playback, but rather tries to process all data....and as it can't keep up, it will detect a "wrong sample rate".

Anyway, try increasing your I/O buffer and process buffer range settings in the audio preferences. PITCHMAP does a lot of math, so very short buffers will strongly increase the CPU load. Also, Logic computes all processes that are in any way associated to a record enabled instrument track on just one core, so if you have plug-ins on auxes fed by the instrument channel etc, those processes will be put on the same core as PITCHMAP. There's a section on CPU optimization in the quick start guide that you can have a look at for more info.

I'm personally running an I/O buffer of 512 and process buffer range set to "large", and PITCHMAP is eating about half of one core (on a 2008 Mac Pro 2.8 gHz, which isn't exactly a modern machine).

we've updated PITCHMAP and the free trial to version 1.1.0, which adds many new features

come and see PITCHMAP as well as our new De-Reverberation & Signal Focusing Plug-In UNVEIL at the Musikmesse, Hall 5.1 A91, where we'll be serving excellent single malt and handing out discount vouchers for our products to our guests. 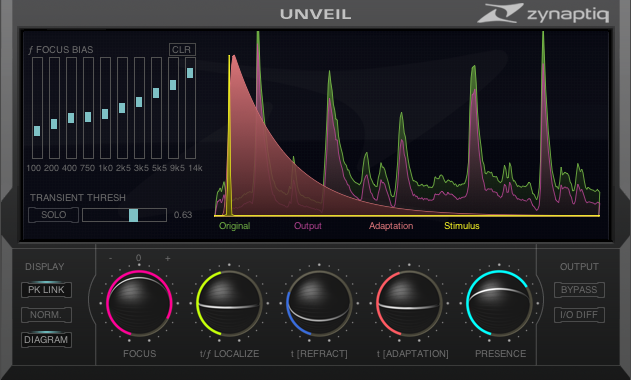 Heads-up: today is the last day our introductory offer on PITCHMAP is running --- so if you're planning to buy it, *now* would be a good time!